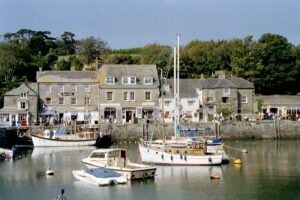 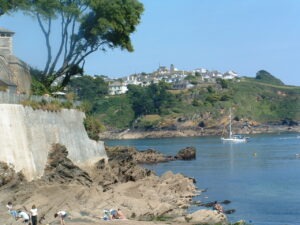 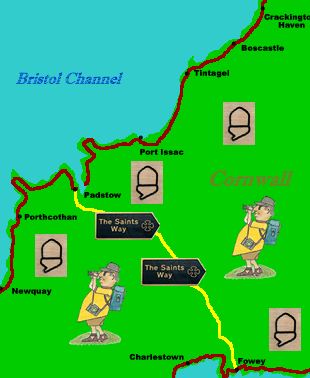 and Bodmin Moor,
South West England
from Padstow to Fowey
via Withiel, Bodmin Moor and Lanlivery

Enjoy a self-guided walking holiday on the 28 mile coast to coast route of the Saints’ Way in Cornwall.
Starting in the quaint fishing port of Padstow on the north coast, the trail follows the route of the legendary pilgrims and missionaries as they travelled from Ireland to Spain, avoiding the treacherous seas around Land’s End.
A fascinating walk through history; with barrows and menhirs from the Neolithic, Bronze and Iron Ages, clapper bridges and crosses from medieval times, derelict engine houses and chimneys from the 18th and 19th-century tin industry. Affording scenery that is delightful and tranquil, the trail reaches the south coast of Cornwall at Fowey.

We offer 2 itineraries on the Saints Way:

You can also make The Saints Way into a longer walking holiday by linking up with the South West Coast Path which goes through both Padstow and Fowey.

Our self-guided walking holidays are designed with your comfort and enjoyment in mind and can be tailor-made to your own personal requirements.
The routes are clearly way-marked to provide reassurance on your hiking vacation.
We use high quality guest houses, inns or small hotels with en-suite or private bathroom to ensure you are well rested each night after a busy day hiking and sightseeing. Rest assured that all our accommodation walking holiday providers are hand-picked and offer you that famous British hospitality.
Special diets can be catered for, including vegetarian, vegan, and gluten free.
We organize the luggage transfer so your bags are at your next accommodation when you arrive.
Let’s Go Walking has developed one of the largest selection of walking holidays and our offices are staffed 9am to 9pm to ensure your walking holiday runs without a hitch.

from Padstow to Fowey
2 days walking and 3 nights

Extra nights from £55 per person depending on location

Extra nights from £55 per person depending on location

What’s not included in your Saints Way Coast to Coast and Pilgrimage walking holiday in Bodmin Moor and Cornwall, South West England

Our self-guided Coast to Coast Walking Holidays in UK include:

Our self-guided Pilgrimage Walking Holidays include: