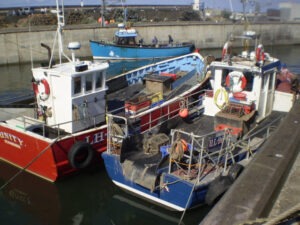 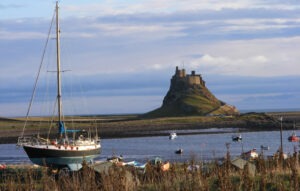 The St Oswald’s Way is one of UK’s long distance way-marked walking trails.
The walking holiday begins on the Northumberland coast at the Holy Island of Lindisfarne, famous for its ruined abbey and fine castle, and follows the St Cuthbert’s Way before heading back to the Northumberland coast to Warkworth via Bamburgh Castle. The walking trail then heads inland following the course of the River Coquet for a short distance. The hiking tour passes through the edge of the Northumberland National Park before meeting up with Hadrian’s Wall Path.
This walking holiday is great hiking for visitors to the UK as it offers a taste of England’s history; Roman, ancient, medieval and religious. The hiking route is a great first walking holiday as it is fairly easy walking and offers a wealth of interesting places to visit en-route.
The causeway to Holy Island is tidal and so this holiday is only available when the tides are favourable.
This self guided walking holiday hikes through some of the Northern UK’s and Northumberland’s best walking country. The Oswald’s Way passes through towns and villages connected with 7th century King of Northumbria who helped bring Christianity to this part of Northern England. 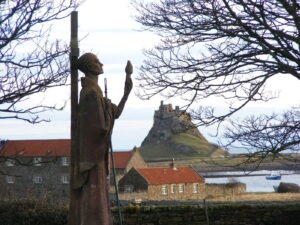 There is an option to extend your holiday on St Oswalds Way to spend an extra day walking the Northumberland Coast Path south for 10 miles (17 km) from Berwick-on-Tweed to Lindisfarne.
Holy Island, Lindisfarne, is one of western Europe’s most important Christian sites. The first abbey on the site dates back to 635AD. The priory that now stands in ruins dates back to the 11th century. The castle on the island dates back to Henry VIII, is now run by the National Trust and well worth a visit. This island is a special place with so much to see it is a great place to extend your stay.

We organize the luggage transfer so your bags are at your next accommodation when you arrive.

Extra nights from £47.50 per person depending on location

Extra nights from £47.50 per person depending on location